The Pros and Cons of a Roth IRA Conversion

Taxes, whether we admit it or not, drive a lot of our personal finance decisions. Avoiding or lowering them can influence where we choose to live, what kind of car we buy, where we send our children to school, whether we purchase a house, and many other everyday decisions. Everyone tries to limit the amount of taxes they pay. Taxes play a large role when we invest for retirement, as well.

One potential way to minimize taxes is by investing in a Roth IRA. With a Roth IRA, you contribute after-tax dollars and withdraw any earnings tax-free in retirement. By contrast, although you generally get a tax deduction on your contributions to a traditional IRA—and the money grows tax-free—you have to pay taxes when you withdraw the money in retirement.

To avoid this, many investors do a Roth IRA conversion, moving their money from a traditional IRA to the Roth variety. The strategy is also known as a backdoor Roth IRA, if it allows investors normally ineligible for Roth to set one up, sneaking in the back door, so to speak.

What Is a Roth IRA Conversion?

An IRA conversion is simply changing the account classification from a traditional IRA to a Roth IRA. Beginning in 2010, the federal government began allowing investors to convert their traditional IRAs into Roth IRAs, regardless of the amount of income they earned.﻿

But there are no income limits for conversions.

Sound good? It can be—but, like most investment decisions, a Roth IRA conversion has its advantages and disadvantages.

Advantages of a Roth IRA Conversion

A key benefit of doing a Roth IRA conversion is that it can lower your taxes in the future. While there’s no upfront tax break with Roth IRAs, your contributions and earnings grow tax-free. In other words, once you pay taxes on the money that goes into a Roth IRA, you’re done paying taxes, provided you take a qualified distribution.

While it’s impossible to predict what tax rates will be in the future, you can estimate if you’ll be making more money, and therefore, be in a higher bracket. In many cases, you’ll pay less in taxes in the long run with a Roth IRA than you most likely would with the same amount of money in a traditional IRA.

Another perk is that you can withdraw your contributions (not earnings) at any time, for any reason, tax-free. Still, you shouldn’t use your Roth IRA like a bank account. Any money you take out now will never get the opportunity to grow. Even a small withdrawal today can have a big impact on the size of your nest egg in the future.

Moving to a Roth also means you won’t have to take required minimum distributions (RMDs) on your account when you reach age 72. If you don’t need the money, you can keep your money intact and pass it to your heirs.﻿

Drawbacks of a Roth IRA Conversion

The largest disadvantage of converting to a Roth IRA is the whopping tax bill. If, for example, you have $100,000 in a traditional IRA and convert that amount to a Roth IRA, you would owe $24,000 in taxes (assuming you’re in the 24% tax bracket). Convert enough and it could even push you into a higher tax bracket.4﻿

Of course, when you do a Roth IRA conversion, you risk paying that big tax bill now when you might be in a lower tax bracket later. While you can make some educated guesses, there’s no way to know for sure what tax rates (and your income) will be in the future.

Yet another common issue that many taxpayers face is contributing the full amount and then converting it when they have other traditional IRA, Simplified Employee Pension, or SIMPLE IRA  balances elsewhere. When this happens, you're required to compute a ratio of the monies in these accounts that have been taxed already versus the aggregate balances that have not been taxed (in other words, all tax-deferred account balances for which you deducted your contributions versus those for which you didn’t). This percentage is counted as taxable income. Yeah, it's complicated. Definitely get professional help.﻿

Another drawback: If you’re younger, you have to keep the funds in your new Roth for five years and make sure you’ve reached age 59½ before taking out any money. Otherwise, you’ll be charged not only taxes on any earnings, but also a 10% early withdrawal penalty—unless you qualify for a few exceptions. 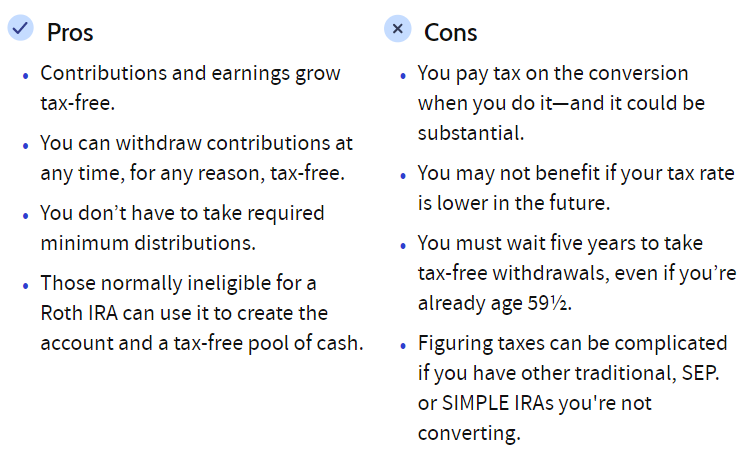 A Roth IRA conversion can be a very powerful tool for your retirement. If your taxes rise because of increases from the government—or because you earn more, putting you in a higher tax bracket—a Roth IRA conversion can save you considerable money in taxes over the long term. And the backdoor strategy, well, opens the Roth door to high-earners who normally would be ineligible for this sort of IRA, or who are unable to move money into a tax-free account by any other means.

But, there are several drawbacks to a conversion that should be taken into consideration. A big tax bill that can be tricky to calculate, especially if you have other IRAs funded with pre-tax dollars. It’s important to think carefully about whether or not it makes sense to do a conversion and consult with a tax advisor about your specific situation.

Does a ROTH Conversion make sense for you? Call a CFP® Professional TODAY to develop the right retirement investment strategy.